You can probably spend a whole day reading reviews and general observations on the new Star Wars movie. This one is mine.

I really enjoyed the movie, it gave me the thrill I was expecting when the first bad movie of the prequels was released. Like Jon Scalzi said in his much better review, it felt good just to sit back and enjoy a Star Wars movie as just a fine space romp, which is all they really need to be. Even if you aren't a fan of the Star Wars universe this is a movie you can just enjoy as a blockbuster science fiction movie.

A few things that stood out to me:


Not everyone here is coming back 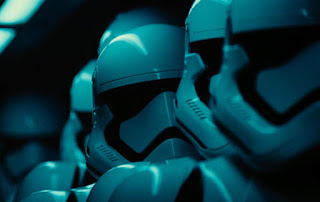 The blaster fire is different. Blaster bolts seem to have weight now. They have mass. More "pop," if you will. I don't recall if that was the case in the prequels, since I have yet to watch any of them a second time, but in this movie if you get hit by a blaster bolt you go backwards. Especially if you get hit by Chewbaca's weapon. There are a couple of nice gags in the movie about that. In the original trilogy the blaster weapons were not unsatisfactory, these are just better. The weapons in this movie look like weapons, not toys. 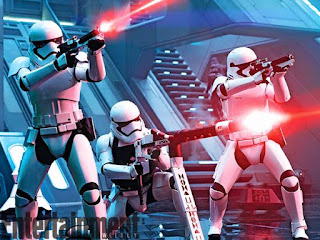 There was a lot of Han Solo. If you like Harrison Ford you will enjoy this movie. Ford has more screen time in this movie than in any of the other Star Wars movie. Han Solo is still a rogue, still partners with Chewbaca, still a hero and still funny. It's not unfair to say Ford is the best actor from the original trilogy and in this movie he is allowed to show that. He brings needed gravitas and humor to the movie. When he says the Force and the Jedi are real it feels more real because it came from Han Solo as played by Harrison Ford. About halfway into this movie I would have been just as happy if Han, Chewie and the two new young characters had turned the Millennium Falcon around and gone on to their own adventures as smugglers. That probably would have been a better movie. 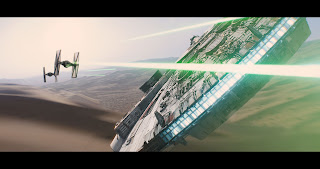 It has plot holes you can fly a death star through and it doesn't matter. The need to fill holes was one of the problems with the prequels. What are the odds of this heroic person meeting that heroic person and then running into a couple of legendary characters, one of whom may be related to the other? Astronomical! Who gives a shit? How did Indiana Jones survive on that submarine? No one cares. This type of movie doesn't need a plot that makes sense. It needs heroes you care about, funny dialog and fight scenes and special effects that kick ass. These movies require plot holes, I expect them.


The world's biggest plot hole and I don't care

There is a lot of nostalgia. Almost too much. The plot is very much inspired by the first Star Wars movie and that isn't bad. The first Star Wars movie is great because it is just a big mess with great action scenes. The magic of that movie is that the plot was not original and much of it was "borrowed" from earlier movies. So, this new one borrowing from the first big borrower works. The scenes where each of the original characters is introduced really work. The right mood is struck each time with a perfect touch of humor added during one scene. I wonder how these scenes will play to younger viewers who watched the original movies first at home. They haven't had over half a lifetime to create the emotional bonds with these characters like us old people. They are probably rolling their eyes while grandfather in the seat next to them sniffles when Han and Leia drown in each others eyes. There are a few times, though, when too much of the plot of lifted directly from the first Star Wars movie. It's a small quibble because everything else is so great, the dialog and the action. No complaints. So we get another even bigger death star, again, no one really cares. Just blow that bastard up and save the galaxy. For now.


Han holds Leia before he goes off to stomp some ass 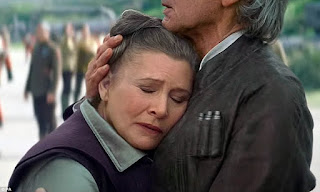