It was that time of the year again this last weekend, the annual trip Jeff and I take to Darlington for the Southern 500. This year we weren't as excited as we have been in the past. Part of it was due to the change of the date of the race. Since 2005 the Southern has been run in the spring. Spring in Darlington, SC is much, much more pleasant than late summer. The humidity and temperature are each lower. I'm not sure of the scheduling negotiations that went on behind the scenes for racing to return to South Carolina in the summer but NASCAR definitely marketed the shit out of it. Marketing centered around returning to tradition with cars featuring "throw back" paint schemes. I thought running the Southern 500 in cool weather was a hell of a tradition to establish and continue.

One tradition NASCAR did bring back this year was green flag passing. There were 24 passes for the lead during green flag racing. I am a big fan of this low down force package NASCAR has used at Kentucky and at Darlington. Less grip means less reliance on down force and that leads to more passing. With this package they are definitely going in the right direction. As far as I am concerned if they ran body styles from 1975 the sport would be better off. Get them cars going sideways and let the best driver win.

Every trip to Darlington I budget for a single souvenir. Usually, I purchase a hat because I like hats and shirts for sale are usually ugly as sin. A week before the race I received an email from the Tervis Tumbler people informing me that they would have a presence at the race. The email said they would be selling tumblers with a design you could only purchase at the race! I had found my souvenir purchase for this year's race. I found their booth and purchased a tumblr. Very class, no?

After the race we ran into a frightening situation. We have sat in the Pearson Grandstand in turn 4 for several years and have never had any trouble exiting the track after race. There is the usual mob but the track has generally had a good system for funneling the crowd out. This year something changed. I don't know what. We seemed to be funneling into a narrower area than before and the crowd got bottlenecked. People started getting frustrated because they didn't know where to go and those behind started putting pressure on those in the front. It didn't take long before people started pushing chain link fences over or climbing over those fences. People were getting angry and panicky and for about ten minutes it got scary. It doesn't take much for a situation like that to get out of control and it nearly did. I hope whoever is in charge of crowd control looks at the area near the Pearson Grandstand where fans are attempting to walk toward Harry Byrd Highway. Whatever was changed needs to be examined.

Kyle Larson in a throwback paint scheme going through turn 3 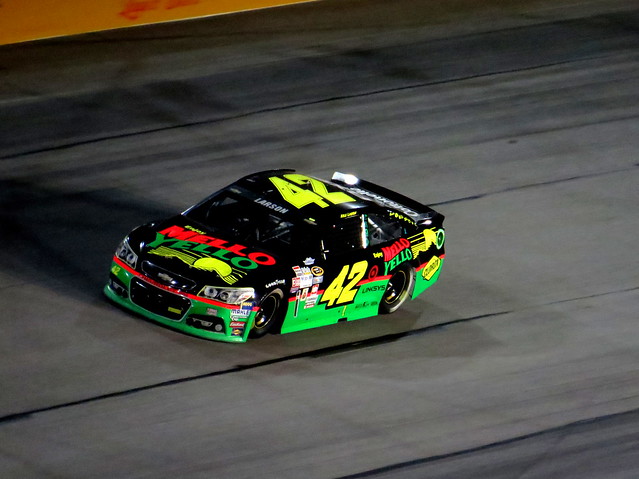