One of my favorite animals that lives in North Carolina is the green anole. I didn't realize until today that the anole is the only species of lizard native to North Carolina. We have one that lives on our back porch. Our hummingbird feeder has a plastic moat we fill with water to keep ants out of the feeder and the anole has been using it as his personal water dish, which is fine because I think he is also eating any ants who show an interest in the feeder. We haven't named him yet but we have tossed a few names around. I really enjoy watching him scamper around the deck, doing his territorial-claiming push ups and inflating his red dewlap, the skin beneath his throat.

Here are a couple of pictures of our new friend. 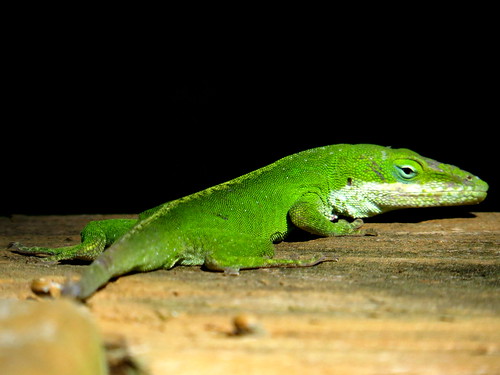 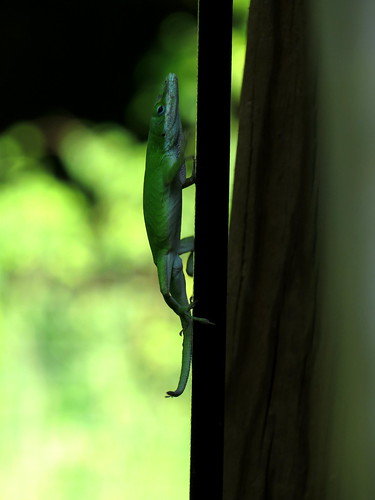 Posted by Unknown at Tuesday, May 26, 2015 No comments: Links to this post

Because Melanie gets motion sickness from 3D movies until this weekend I had not seen a movie using the new 3D technology. Friday I received a text from a friend, he was organizing a fellas night out and he wanted to go see a movie. He specifically wanted to see the new Avengers movie. Since I had already seen the movie I proposed seeing the 3D version. The fellas agreed. At first I was distracted by the what I was seeing in 3D. Mostly it was me thinking, "Oh, that looks cool." After a few minutes that wore off and I was watching a movie again. Occasionally something would happen and the 3D would enrich what I was seeing on the screen. Mostly, as we agreed during our post movie powwow, that the 3D worked best when it gave a shot a sense of depth. The best example of that was early in the movie when Iron Man was flying high above the castle the Avengers were attacking. The 3D effect successfully portrayed that Iron Man was several hundred feet above the castle. It was subtle and subtle is often better than in your face.

I did notice two drawbacks to the 3D effect. During some of the more hectic battle scenes it was difficult to follow the action. To be fair, in this new Avengers movie even with the normal view it can be hard to follow the frenetic action. Also, the glasses you have to wear make the movie appear darker. Not a lot but it is noticeable.

Another thing about 3D films is that a ticket costs $3 more than for a 2D movie. Like the prices of CDs in the mid 90s this is bullshit gouging. You expect me to believe that the creating of a 3D print of a movie costs 30% more than the 2d? I ain't buying it.

That all being said I see no reason for 3D not to be the standard soon. There were several moments in the Avengers movie where the 3D version was superior to the standard 2D. Specifically, the moment in the first battle where the Avengers line up while attacking and early in the penultimate fight when the camera spins around the Avengers as they fight off the horde of robots. Two moments likely filmed with 3D in mind. This moment in the Jurassic World trailer was stunning. 3D films intrigue me because 3D gave me a reason to see a movie in the theater for a second time. It has been a long time since I have done that.
Posted by Unknown at Thursday, May 14, 2015 No comments: Links to this post